The Yank's House - The big dig out

Back at the house the next major job that needed to be tackled was digging the clay away from the outside of the basement walls. The clay was built up to the level of the basement windowsills. This was causing sever damp in the walls. We hoped by digging the clay away from the house and laying drains we could solve the problem. Getting a man with a Hi-Mac free to do the job was another matter. Brendan the gardener gave me a name and number—but this man was too busy to come. Then one day when we were working at the house I heard the noise of a machine starting up. I went out to see what was making the noise and there in the garden of the new house, across the lane, was a big yellow Hi-Mac. I couldn’t believe my eyes. Not wanting to miss an opportunity I walked over and got talking to the Hi-Mac man. He agreed to do the job while he was in the area. It was a great relief.

When the clay was taken away from the walls water rushed out from under the house. 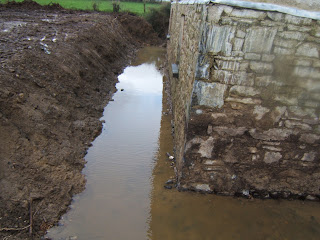 No wonder it was damp inside. Water had been trapped under the floors for years. The stone walls went well below floor level which was lucky. It meant we were able to place the drains under the level of the floors. There was an old drain running down the side of the garden to a stream. We had this opened up again and made a cutting from the new drains around the house into it. Thankfully the water seeped away. 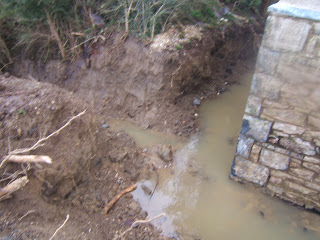 We cleared the site while we had the Hi-Mac in, dug up old tree stumps and bushes and leveled the ground around the house. We also had a trench dug across the yard from the house to the newly erected ESB pole. We had to lay piping in this trench to hold the electric cable that would eventually supply the house with power. All this digging was done over the winter months. I had never experienced such muck. Black boggy clay stuck to my boots making them heavy to carry on my feet. Sometimes my boots would get stuck in the mud and I would feel my feet slipping out of them when I’d try to walk. I was glad when the time came to load the Hi-Mac onto its transportation trailer and watch it disappear out the lane.

In our innocence we believed the Hi-Mac man owned the Hi-Mac he was driving. We negotiated hours and price with him. When the first lot of digging was complete he gave us his hours and we paid him the agreed hourly rate. He then settled on a price with us to remove the surplus clay from the site. Again happy with the quote and the work, Pat met and paid him in full. However, totally out of the blue the Hi-Mac man phoned me one day looking for extra money. I told him I would have to talk to Pat.  Alarm bells should have rung but we just thought he was chancing his arm. Also we wanted him to finish up a few small jobs before he left, and as we were the blow-ins in the area—we didn’t want to fall out with a local man. Pat phoned him back and negotiated a price—much less than the original demand. He finished the work and was paid. This should have been the end of the story, however a week later we had a phone call from a complete stranger claiming to own the Hi-Mac. He wanted to know if we had paid the Hi-Mac man and how much we had paid. It transpired that he had done a runner with our money and had not turned up for work for over a week. We felt a bit stung—lesson learned we would be more careful in future.

It was late spring before we resumed work on the drains. The spring proved incredibly dry with record temperatures for April. All this helped dry up the ground around the basement and make it easier to work out our levels. We decided to lay a drainage pipe and also to stone the drain below and above the pipe. We used 20 millimeter stone. We laid the drainage pipe well below the floor level of the house with a fall to the drain we had cleaned out along the garden. 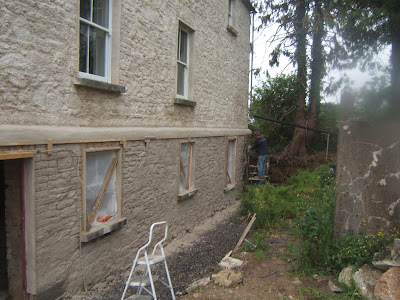 We hope this is going to improve drainage around the house and the damp issues in the basement. Time will tell.
Posted by Catherine Kane at 04:32