The yanks house has wooden sash windows. When we first bought the house most of the windows were stuck closed while a few were stuck open. Some had all their glass intact others had broken or missing panes. All had woodworm. A few had rotting timber. On a positive note all still had their original brass catches but this wasn’t immediately obvious as they had been painted over.

When we took the first pair of sash windows home to repair we used paint stripper to take the old paint off. It was difficult to remove the paint without damaging the wood, especially the narrow glazing bars. The paint stripper caused the paint to bubble but it still needed to be scraped away. It took several layers of paint stripper before the wood started to show through.

Once the paint was removed the window needed to be sanded. The catch was still intact on this first set of windows so I started sanding it back also – removing the paint and dirt. Gradually the catch started to shine back at me. I called Pat and we examined the catch. We were delighted when we found a lovely old brass catch. It cleaned up like new. From then on we took the catches off and cleaned the paint off and polished them up with loving care.

After stripping the paint from the first pair of sash windows it became apparent that we needed some other way of doing this. It was difficult to get the paint off the fine glazing bars without damaging them.

Now I am totally addicted to home improvement programs on television. My family can bear witness to this. On one such program I saw doors being taken to a caustic bath for dipping. This got me thinking – could I set up a dipping bath to clean the old paint off our windows? To make things even better I discovered this also kills woodworm.

I was able to purchase caustic soda in my local hardware store. We set up a shallow dipping tank in the back garden. We had just enough liquid in it to cover the timber bar of the window. By rotating the window we could do all four sides. Once the window was dipped the paint got soft and milky. The window was then removed from the bath and hosed down with water until it was clean. We then left the windows to dry.

Once dry the windows were ready for a light sanding and any necessary repairs could be done. If you want to use caustic soda to remove paint but you don’t want to use a tank you can paint on the caustic soda diluted in water and it will still dissolve the paint but it is a bit messy. I should mention here that dipping is only advisable on soft wood such as pine. Hard timbers should not be dipped as it can cause the timber to split. This discovery speeded up our work on the windows and later we dipped doors and shutters also.

In all we had sixteen windows to remove, repair and refit. This was slow work and continued throughout our first winter. Pat would bring one or two windows home at a time. Once these were ready we put them back into the house and he would take home two more. At the start I helped with the windows but as winter closed in on us Pat spent many evenings alone in the shed.

The first two windows we fixed were very rewarding. As I previously said we removed the sashes from their frames and took them home. Meanwhile I worked on the frames anytime we were at the house — stripping and treating them for woodworm. I then painted the fames with metallic paint — advice received in my paint shop. I gave the frames two coats each sanding between applications followed by two coats of white hard gloss paint. The two sashes got the same treatment at home.

The pulleys were rusting and stuck. Pat cleaned and oiled them and got them working again. The cord was rotten and broken so it had to be replaced with new cord. These first two windows didn’t need any woodwork repairs — a reason why we opted to start with them. At last the day arrived when we were ready to reinstall the windows. It took a bit of time to work out the pulley system on the first window and in particular the length we needed to leave the cord. But once we got the balance worked out and the first one installed we did the second one in half the time.

Satisfied the windows looked good from the inside and worked well, we skipped down the stairs, delighted with ourselves and dying to see them from the outside. It was a bright sunny autumn day and the windows with their wobbly glass sparkled in the light. Pat looked at me and said ‘We have given this house back her smile’. It was a lovely way to describe what the house looked like with two freshly painted clean windows in place. Every time we installed a new window I felt the same satisfaction. The old sash windows give the house back her sole. They were full of character and charm that we could never have achieved with new replacement windows.

We had found two lovely restored sash windows at the salvage yard that I just couldn’t leave behind me. At the time I wasn’t quite sure what we might do with them but later we decided to use one of these to replace an old steel window that had been installed in the basement at some stage in the past, while we used the other to replace a smaller window at the back of the house, also in the basement. This let more light into an otherwise dark room.

Pat had to make the openings in the walls bigger so these windows would fit. At the same time he installed the meter box for the electricity and the necessary trunking. We were lucky to have Jason, another family connection to help build up the stone and brick around these two windows. Jason is an excellent stone mason and brickie. After one weekend these two windows looked like they had always been there.

The frames for the window sashes were fairly good throughout the house until we reached the basement. Here the damp and wood worm had taken their toll on the timber. Pat took out one frame and brought it home. He copied this to make new frames for the remaining basement sashes. Daniel helped make these frames. He has always had an interest in woodwork and loves working with tools. We had invested in a chop saw, a plane and a router.

When all the windows were back in the house we were well satisfied. To onlookers we might appear a bit mad. We have no double glazing or sophisticated draft exclusion. Our glass is bubbled and scratched and we have refused to replace glass that has fine cracks. The timber is anything but perfect and some sashes are loose while others are stiff and difficult to open. But we have the satisfaction of knowing we did it all ourselves. These windows would have cost a small fortune to replace and we believe the character of the house would have been altered forever. Every year since there has been something that needs attention. We have now painted our windows three times. Currently one of our windows needs a new wooden bar. But we will struggle on to keep them because for us they are worth it. 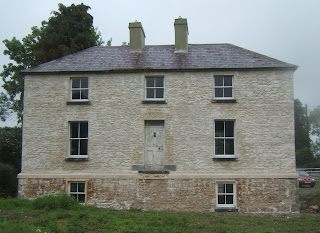