It was mid July when we got the house. I don’t work July and August and Pat had saved all his holidays. We were very excited, dying to get started. That first morning we were up at seven. We filled the flask, made the packed lunch and were on the road by eight. We hadn’t been to visit the house for many weeks and we were not prepared for the sight that greeted us. The lovely graveled back yard that had impressed us so much in winter was now an over grown jungle of tall grasses and weeds. I’d never seen anything like it. The grass was up to my elbows and I couldn’t even see the back door. I knew Pat’s heart had sunk but he pushed forward making a path for me in his wake. Inside, the house was much damper and dirtier than we remembered. 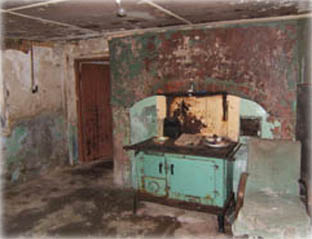 On the old range sat a milk-can lid containing syringes and needles. I hadn’t noticed them on earlier visits. There was a bad smell coming from the stair well and dairy. We had had a visitor. What looked like human excrement lay on the floor. Further up the house was more as I’d expected and remembered. Pat went back to the car and returned with shovels, buckets and gloves and the cleanup began. He assured me the syringes had been for animal use and nothing more sinister. Once we started we threw ourselves into it. After a hard day’s work things looked better. We returned home that evening dirty, sore and exhausted.

It took two days to clean the rubbish out of the house and it was tough. But day three was worse. We didn’t know where to start. There was so much to do. We stood in the dairy, looked at each other and around us and we were totally lost. I could see Pat’s resolve was ebbing a bit so I needed to come up with something. I suggested we could start stripping the plaster off the dairy walls—it might help them dry out a bit. 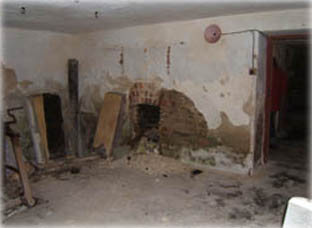 We got too lump hammers and started and by evening we had two of the four walls stripped back to the stone. They looked great and the room started to take on a charm of its own. With every bit of plaster we removed I felt the house was revealing it secrets to us. The following day we finished the other two walls and the room we had found least inspiring in the whole house became our favorite. Pat told me I had worked as hard as any man and my elbow seemed to be telling me the same thing. It was on fire. The pain was unreal. I couldn’t sleep. I couldn’t lift the hammer. I couldn’t lift my arm. I thought that was it. I wouldn’t be able to help anymore. I didn’t have an arm support but I had two elastic stockings from a previous hospital stay. I started putting one on my arm when going to the house. Eventually my arm did get stronger and in the end I could hammer walls all day long without pain.

These first weeks were spent removing all the plaster off the walls, inside and out. In the basement the plaster was wet with damp. In places dirty moisture splashed our faces when we struck it with the hammer. However, the stone was in good condition underneath. Further up the house the walls were dry. In places the plaster was hollow and coming away from the walls. Here large slabs of plaster would fall off at a time. 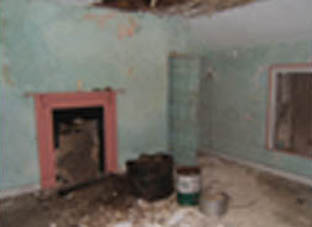 Other places it was dry and powdery. Where repairs had been done over the years was worse. Here concrete had been used. This was impossible to remove and when it did come off it brought the surface of the stone and brick with it. Work was slow and we soon realised we could do with some help. Pat asked his brother Brendan and he started coming down with us any time he was free. Pat is good with his hands. He is goods at fixing things. Brendan is a great worker. But I think he prefers to knock thing down. He was great at stripping off the plaster and he also took down all the old ceilings, pulling all the thousands of nails that held them up. 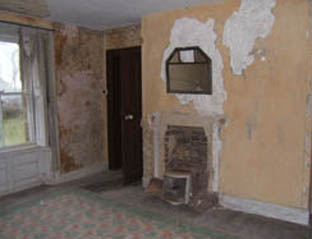 It didn’t take long after starting work in the house to discover we had company. In particular we had a mother and three babies and she was anything but pleased with our intrusion. Before your imagination runs away with you I better explain. I am talking about a family of swallows. She swooped around the house with such accuracy, never crashing into windows or wall, and always at high speed. The adult swallow would fly through a broken pain of glass in the basement and up the stairs to her nest, which was over the front door. She had three little babies in the nest, mouths constantly open. If you met her on the stairs she would do a swoop, turn and fly off in front of you. Many times she soared in through the broken glass only missing me by inches. One particular day when Pat and I were working in the front hall near to her nest she insisted on flying in and out the open door. I think she was keeping an eye on us. At one stage we were standing talking to one another and she passed between our faces. We stripped the plaster off all the inside walls but left the area around her nest until she was ready to leave. Then one day in September we came down and she and her babies were gone. The place seemed very quiet without them.

Now I cannot go on without warning any of you girls out there that might be thinking of getting into restoration work. I soon discovered that just because I worked like a man didn’t mean I could eat like a man. I know this is cruel and unfair but I was under the illusion that all this work was like going to the gym. I couldn’t possible put on weight. So at lunch time ravished by fresh air and hard physical work I would sit down to lunch and match Pat bite for bite. You can imagine my distress when clothes started to get tight. Reluctantly I stood on the scales. I had put on a half stone over the few weeks we had been working on the house. To my utter dismay Pat had lost weight. It just goes to show how unfair this world is to us women. Anyway I had to adjust my eating habits while Pat continued to eat what he liked.

I have a question for all you girls out there. How would you describe a romantic man? Someone who buys you flowers and chocolates and sends you valentine cards perhaps. I always said my fellow hadn’t a romantic bone in his body. For instance for our first Christmas together he gave me a frozen pizza. Point taken, I hear you all say. I used to get upset about it but then I discovered that he knew how to turn on the washing machine and he knew his way to the clothes line, and he was very good at grocery-shopping even if he would never be seen dead in a shop that sold lingerie. After all, flowers die and chocolate makes you fat. No girls, my Pat is very romantic. It just took me a while to appreciate the fact.  Breakfast in bed is common, especially on mornings after a hard day’s work at the house. Buying the Yank’s house was more my dream than his, but Pat always strives to makes my dreams come true. I told him this one day when we were working hard at the house, tired sore and covered in dust. He laughed and said he was sorry. ‘Sorry for what?’ I asked. ‘For giving you night mares’ he replied. I had to laugh, but he made a good point. This restoration work is not for the fainthearted. And if you are not prepared to get your hands dirty and break a few finger nails than I hope you have plenty of dosh.

We didn’t have, so we had to learn. Once we had made the decision to purchase the house we started to take books out of the library and to search the internet for any help we could find on restoration work. We loved the house because it was old and we wanted to keep what we loved but also to update the house for twenty-first century living. Many of these old vernacular houses in Ireland have been stripped back to the stone rubble and pointed with concrete. We had seen plenty of examples and to be honest I really liked how they looked. Our house was built of random stone rubble. My first instinct was to follow the same trend. However the literature strongly advised against this and the more I read the more convinced I became that the Yank’s house had to be restored using the same materials that had been used to build it in the first place. I started to read about lime mortars and stone wall building. Pat got engrossed in this research too and the stack of books grew on the coffee and bedside tables. Anytime we found something new and interesting we would share it. We talked for hours. One evening Pat asked me what we used to talk about, before. I couldn’t remember. It was great to have a new interest, new things to learn and we both felt so energized.

I had access to a wonderful library at work. One day when I was picking up a book on Victorian houses the librarian asked me if I owned an old house. I said I did and he laughed and asked how I could afford that on our wages. I’m sure he had a vision of a beautiful Victorian house in the city. What I had was a bit different.