The Yank's House - The Roof

To say we were worried about the roof would be an understatement. We wanted to fix it before winter. It was in a very bad way. And the longer it was left the more damage was being done to the other parts of the house. It wasn’t just a patching up job that we could do ourselves. We needed a professional. 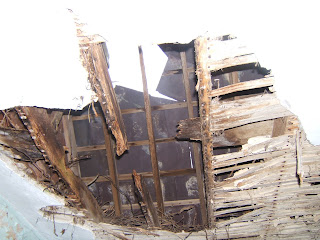 I got a copy of the Longford Leader to see if there were any advertisements for roofers looking for work. We didn’t know anyone in the area at this stage and we knew there was no point asking a roofer to travel from Meath. Anyway, with the building boom nothing short of a miracle was needed. One roofer I phoned suggested winter was a better time for putting on roofs anyway. He was up to his eyes.

We were worried and when I am worried I usually have a chat with Saint Martin. Laugh if you like - it works for me. So one night, lying in the dark before sleep, I asked St Martin to send me a roofer. And strange as you may find this, that is exactly what he did. The very next day, I was sitting on a window sill on the top floor, paint-stripping when I heard a voice calling up to me. ‘Nice Day’ the voice said. I looked down. There was a big tall broad man standing in the yard, holding a stick that one would use to hunt cattle. I hadn’t heard him come and there was no sign of a car. He must have walked. We started to talk; he commented that it would be a fine house when finished. I invited him in to meet Pat who was working down stairs and I went down to join them. His name was Michael. He lived locally but he had never been in the house before. He walked around tapping the timber with his stick, asking the odd question and moving from room to room. It transpired that he was a carpenter. He asked where we hoped to start and we told him we were worried about the roof. He just turned round and said ‘I’m your man’. He left as quietly as he had come. I only delayed for a moment behind him to give Pat the thumbs up and when I went out to the yard he was gone. I ran into the lane, there was no sign of him anywhere.

Some days later after we had shook on it, he told me he didn’t know what came over him that day, to make him walk over to the house. I told him I knew: Saint Martin had sent him. He laughed and said ‘Now isn’t that a good one’. Never the less I was glad, when he started work, that he arrived by car. It would have been a bit too spooky even for me if he kept appearing and disappearing. 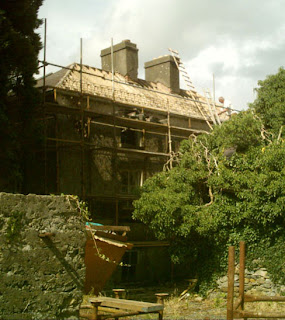 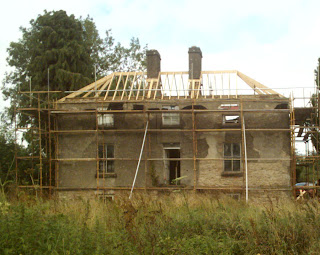 My sister was anxious - I should get references, but sure you cannot ask Saint Martin for a reference. Four weeks later we had a lovely new roof. All the timber had to be replaced. But we saved as many of the old slates as we could and put them back on. It looked great.

One dark Saturday, when the roof was off, we had to go to the house to clean out all the rubble from the top floor. The ceilings had been knocked down. It wasn’t safe for the men working on the roof because the floor underneath wasn’t clean. I couldn’t believe how much rubble there was and to make matters worse it was lashing rain. I filled the rubble into buckets, passed them out the window and Pat took them across the scaffolding to empty them. It took us all day. We were covered in muck and dirt and very, very wet. Not wanting the situation to get us down, I stood in the roofless room and suggested to Pat, that he should come in out of the rain. We laughed. Being able to laugh in difficult situation is a great tonic. Many are the days a laugh got us through.

One of the first people we met in Ardagh was Brendan. He is the gardener in the village. But before I tell you how we met him I have to take you right back to the start. We had just paid the deposit on the house and were waiting to close the deal. I was sent from work to a conference in Sligo. Equipped with a bundle of house magazines I settled into my seat on the train. The lady sitting beside me was writing something. She seemed busy. After some time the tea trolley came round. I had a sandwich and tea. My neighbor put away her work and had a coffee. We started to talk and she told me she lived in Ardagh. I told her about the house and my ambitions to restore it sympathetically. She told me I’d have to get to know the gardener. He was into old houses and restoration. She got off the train in Edgworthstown and I didn’t think any more about it.

However months later when we were traveling up and down to the house, I often admired a lovely restored cottage that we passed just outside the village. I brought it to Pat’s attention. I was dying to get a closer look so one evening I convinced Pat that we should call and introduce ourselves. I was very disappointed to find the gate locked with a chain and padlock. There was no one at home. However I noticed a sign in the hedge that said Ardagh Landscaping. The penny dropped. This was the gardener’s house.

As soon as I got home I was back on the internet. As luck would have it Brendan had a web page. I phoned him later that evening and that was that. He was so helpful and supportive. His name will pop up again and again in this story. He recommended different people to us when we needed help and was invaluable when researching the history of the house because of his local knowledge.

We had arranged one day to call to Brendan’s on our way home from the house, to meet him in person and to see his cottage and garden. Michael the carpenter was working on the roof the same day, so I told him where we were going and asked him if he knew Brendan. He said he didn’t but he warned me to be careful. ‘That fellow might lead you astray with his ideas on restoration’ he said. We headed off and to our delight Brendan was a lovely fellow and we got on straight away. He had a great handshake. I told him my story about Saint Martin and about Michael calling the following day. He looked grave and said ‘Now Catherine, just be careful’. I said ‘I only know two men in Co Longford, and they have each warned me about the other’. Brendan threw his head back and laughed a great big hearty laugh. But I was left to wonder, do I come across as a dizzy sort of woman or are Longford men very suspicious of one another. It may take time to work this one out.