I haven't written anything in ages. Sorry if you were waiting for the next installment. Here it is at last.

I was saying earlier we wanted to repair the house using traditional building methods. But we didn’t know how to do this. We had lots to learn. For instance we knew we needed to use lime to repair the structure of the house but we didn’t know what lime putty was or how it differed from hydraulic limes. Nor did we know which type of lime we needed to use on our house. I read everything I could find about lime, in books and on the internet and I was scared. I had visions of us having a large hole dug in the garden full of steaming hot lime. It sounded dangerous. So when I found the Web site for the Traditional Lime Company in Carlow I was relieved. Here was somewhere we could go to get advice and it wasn't too far away.

The web site said The Traditional Lime Company organized courses and did site visits. So one weekend, I printed off a photo of the house, knocked a big lump of plaster off the wall and we headed off to Carlow. We didn’t make an appointment. It didn’t even dawn on me that we would need to. When we got there we discovered we should have. The Traditional Lime Company is a one man outfit. If you need advise you need to meet Edward Byrne himself. When we got there we met Frank. Frank runs the store. He told us we had just missed Ed. Lucky for us he reached him by phone and Ed agreed to meet us at his home.

Edward Byrne loves to talk about lime. I really enjoyed listening to him. To my relief he said we could use hydraulic lime, 3.5. This could be mixed in an ordinary cement mixer. He phoned Frank and asked him to show us how to do the mix. Also he told us we could purchase a spray gun to apply the lime mortar to the outside walls. Frank would show us how to do this also.

We headed home that evening with a few bags of lime, sand and the gun in the car boot. We were ready to have a go.

There is a knack to applying lime plaster; firstly you have to wet the brick or stone wall, spraying it till damp but not over wetting. This prevents the moisture in the limecrete mix being drawn into the dry walls and prevents the plaster drying out too fast. It also also helps the plaster to bond with the brick or stone. This type of plaster dries fast, so in order to slow down the process and avoid shrinking and cracking you need to keep the plaster damp by spraying with water at regular intervals. The speed at which it dries depends on the weather, hot sun and drying winds will speed up drying and more spraying will be needed than on dull days. Apart from this you can apply lime plaster as you would cement plaster, using the same tools.

We stripped all the outside plaster off the walls. The house looked lovely with the stone exposed. I was tempted to leave it but in my heart I knew we had to plaster it again. Our house was built with rubble stone and always had a plaster finish.  The house had to be power-washed to remove any loose dust and plaster. This should have been a straight forward job but there was a small complication. We had no water supply. We hired a petrol power washer — at this stage we also had no electric supply. However water was a bigger problem to solve. We brought full milk cans from home but these ran out well before the job was finished.We had to get to know our new neighbors. We found everyone very helpful. They all had memories of times spent at the house and were all happy to see us doing it up.

They also helped us fill in the history of the house which I will write about later. 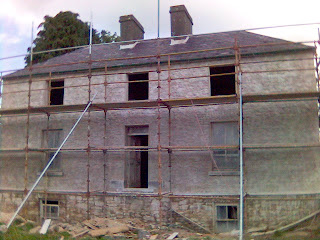 Anyway enough distraction, back to the lime plastering. The basement walls of our house are thicker than the walls further up the house. As a result a ledge runs around the outside of the house at basement ceiling height. In the past this had been capped with slate which had not proved to be the best at keeping out damp. We decided to run a strip of lead over the ledge, bringing it up the wall so we could plaster over it and allowing it to run over the ledge to throw water away from the lower wall.  This photo shows the lead edge with the lime plaster above. 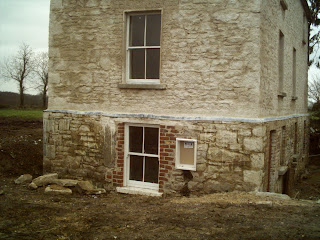 Once this was in place our house was ready for plastering. We had heard mixed reviews about using the spray gun. Professional plasterers would advise against it; but we couldn’t afford to hire anyone. Pat is not too bad at plastering but we knew this was too big a job for him and also would be much slower than using the gun.

Before we could start, Pat plastered up the reveals around the windows and doors. If you know what I am talking about great—if you don’t I suggest you go and have a look at a house with finished dashing. You will notice the inside area around the windows and doors has a flat plastered finish. This has to be done with a trowel. The dashing on the outside walls comes up to the openings to meet this flat plaster, giving you a lovely square finish around your windows and doors. Pat put up temporary timber frames around the openings giving him a flat surface to trowel the plaster up against. Once the timber was in place he applied the lime plaster, from the window or door frame up to the edge of the timber frame he had put in place. Once the plaster dried we were able to take down the timber frames. We had lovely edges around all the openings. This was slow work but we got there and at last we were ready to start the walls.

Daniel and I headed of to the local hardware shop to see if they could help. It was lunchtime and we were frustrated because we hadn’t been able to start. In the local shop they told us we would have to travel through Longford town, to a different store to get the hose and fittings sorted. Now I do not like driving and I am worse when I have to drive somewhere new. Longford is a busy town. I was sure I’d be sandwiched between two monster trucks. I was a nervous wreck by the time I got to the store but they did a good job on the hose. It was three in the afternoon before we got back and were able to start.

We had bought a new cement mixer. This was my territory. I was given the responsibility of doing the mix, one part lime to two and a half parts sand. You need clean, sharp sand for mixing with the lime. We opted for granite sand. The water had to be added slowly and each mix took twenty minutes so the lime would have time to fatten. It was a bit like making pastry and I am good at that. Pat was up the scaffolding with the spray gun. Daniel was with him pulling up the buckets of plaster. Brendan was at the bottom collecting the plaster from me and filling the buckets. The assembly line worked well except Brendan always seemed to arrive for another load of plaster before it was ready. I had a job making him wait. If he thought it was too wet or too dry he would slag me off. We worked late that first evening after our slow start. It took two days in all to get the first scratch coat on. I should mention here that we were only doing the top two floors, down to the led cover ledge. We would need to dig out around the house before we would be able to do the basement walls as the clay was up against them. We had to let the plaster dry out before we could apply the second coat. It should be left for at least two days. And we had to do the same before the third coat was applied. After three coats it looked really good.

Now this finish might not be to everyone’s taste. When you use the gun to apply the plaster, the plaster follows the contours of the stone. So it is obvious that the walls are built of stone rubble. If you prefer a flatter finish I think you will need to do it by hand. Also we did not finish the final coat with a pebble mix. This again would need to be applied by hand to get it right. We are lucky our house is not listed. If it was a listed house we might not have been allowed to apply the plaster in this way. However we liked the finish and were happy that we had applied a plaster that would protect the house while letting it breath. 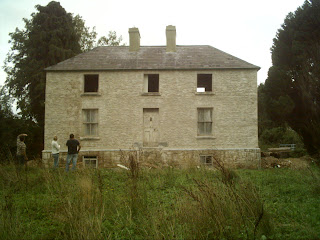 Posted by Catherine Kane at 10:26 No comments: