While the yank’s house is a modest house there were some small treasures that we were delighted to find and anxious to save and restore. The original front door was of very basic construction but it was the source of our first treasure finds.
There was a lovely original cast iron combined letterbox and door knocker by Archibald Kenrick & Sons No 401. On the back of the door knocker we found what turned out to be a Diamond Registration Mark.

In 1835 a committee of MPs was set up to revue evidence regarding the pirating of designs in British industry. Seven years later in 1842 the need for copyright of design was recognised and an act was passed in Parliament to give the manufacturers legal protection for their designs. The act gave them three years protection from the date of registration and a fine of £30 would be imposed on anyone found guilty of copying an item while the protection was in force 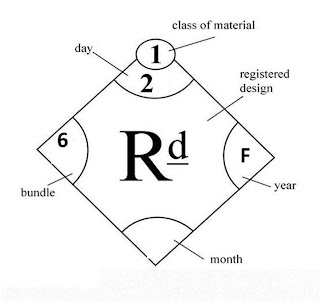 This is the diamond mark on our letterbox. F in the year is 1873. 1 in the class of material stands for cast Iron.

Our door knocker was dirty, rusty and caked with old paint. It was so well secured in the door we had to take the door apart to get it off. Maybe this was why it had survived so long without getting stolen. The detail at the top of the knocker was chipped off so maybe at some stage someone had tried to remove it. We wrapped it up and took it home.

Now it is time to introduce you to my brother-in-law – Gerry. He is so gifted when it comes to fixing and restoring iron pieces, locks, brass – indeed anything small and detailed is safe in his hands. So on my return home with our door knocker I went straight to Gerry to show it to him and ask him to clean and restore it.

He did a great job. I am sure you will agree when you look at these pictures. 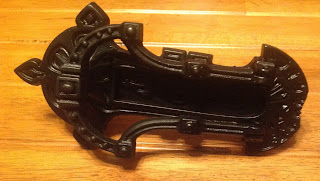 There was also a lovely old door knob that got the same treatment from Gerry. These will both look lovely on our new front door.

The third thing we found on the door was a forge crafted lock. We no longer had a key but the lock itself was very interesting so again we took it home to Gerry to see what could be done.  Weeks passed and we were busy at the house, we put the old lock out of our minds. I wasn’t sure what Gerry would be able to do with it anyway.

Then one Sunday afternoon about two months later Gerry arrived down to us with the lock wrapped in a soft cloth. When I opened it up I was so surprised. It was beautiful – all shiny and new. Then he pulled out a new key he had made for the lock. I was so excited. The key is so big. You would need a big pocket or handbag to carry it about.  Gerry had fixed the lock and had it working perfectly.  I cannot wait to see it fitted on our new door. 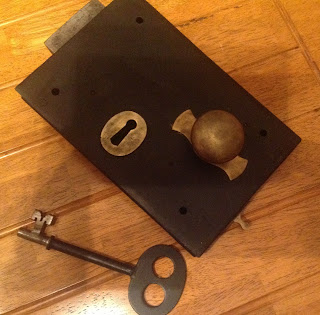 I need to get my cloth out and polish up that brass nob! Gerry wont be impressed.

Posted by Catherine Kane at 05:13 No comments:

A short while back I got a message on the blog.  It read;

I have a quick question about your blog, do you think you could e-mail me?

Always happy to talk about the Yank’s house – and answer questions - I sent Brian a message.

It turned out Brian is a health and safety blogger for the Mesothelioma Cancer Alliance. He asked if I would be willing to post something on the danger of finding asbestos when carrying out a restoration of an old property.

We were lucky not to come across any asbestos at the Yank’s House but it seemed a worthy cause and I guess I am a bit flattered that he feels my blog will help get the message out there so here goes. This week’s blog is from Brian.

As always comments very welcome and if you feel this is something you would like to spread the word about please retweet.

Asbestos Basics for the Home Renovator

Asbestos was a popular manufacturing material during much of the twentieth century. Although the dangers were known for quite a while, it took government agencies several years to address the problem. The United States banned asbestos in the 1970s. It was not until after 2000 that other countries, including Australia, approved a ban.

Asbestos is the commercial name for a strong, durable substance made from six natural minerals. Praised for its resistance to fire and heat, it appeared extensively in early manufacturing. Industries across the globe had numerous applications for asbestos, from electrical and building insulation to automobile components. Manufacturers often mixed the substance into cement or wove it into fabric.

What are the Health Dangers?

Undisturbed asbestos is relatively safe. The danger occurs when someone damages the substance. Cutting, tearing, sawing and sanding asbestos sheets will send microscopic particles into the air. The tiny airborne fibers can enter the lungs and cause significant health damage.

The most common asbestos-related disease is mesothelioma, a rare and malignant cancer. Mesothelioma destroys the lining of the lungs and other internal organs in the chest and abdominal cavities.

Asbestos exposure contributes to other diseases too. Among them are lung cancer, asbestosis and pleural effusion. The outlook varies for people who have these diseases. It generally depends on the disease and how much lung damage has occurred.

During the mid-twentieth century, asbestos materials were widely used in building construction. Modern home renovators must use extreme caution when they work on older homes. They are likely to find asbestos in roofing, flooring, siding and insulation materials.

To prevent asbestos exposure and asbestos-related illness, renovators should avoid disturbing any material that may contain the substance. Such material should only be repaired or removed by qualified professionals. The Environmental Protection Agency (EPA) or local health department can offer guidance.

The EPA advices homeowners and contractors to wear protective gear when working with asbestos. Facemasks and respirators offer protection against harmful asbestos fibers. To protect family members and onlookers from possible asbestos exposure, home renovators should block off work areas from the rest of the house.

Asbestos in the Home

Image courtesy of the Mesothelioma Cancer Alliance.
Posted by Catherine Kane at 07:23 2 comments:

I love the Web – looking at other peoples houses, checking out crafts people, looking up different products, searching for a bargain or just chatting with like-minded people. Whatever I am at I can spend hours browsing.

So when Pat and I started restoring the Yank’s house I turned to the web for ideas, information, knowledge and just old-fashioned support. And guess what? I found everything I was looking for. So this week I decided to share some of my favourite web site with you. Who knows you might find what you are looking for too.

Early on in the restoration I needed to learn about Lime. Web sites like The Traditional Lime Company http://www.traditionallime.com/ where we found our trusted adviser Ed Byrne and St Astier http://www.stastier.co.uk/ web site were we found some great guides and information are just two of many.

For an Irish perspective on restoring old buildings I love the Former Glory web site http://www.formerglory.ie/ . The Advice and Info section has some good reading and for inspiration have a look at some of the stories of other restorations or even go and stay in one that offers guest accommodation.

For guest accommodation in a restored property in Ireland also have a look at the Irish Landmark Trust web site http://www.irishlandmark.com/ . I really enjoy being able to view the interiors of these beautifully resorted properties from the comfort of my own armchair.

The Old Builders web site http://www.oldbuilders.com/indexmainpage.htm shows lots of lovely examples of work they have completed. Another chance to have an inside view and again Irish buildings, many of which are  of very modest proportion.

I also like to drop in on The Irish Georgian Society http://www.igs.ie/  web site every now and then to catch up on anything new there and also the Irish Heritage web site http://www.heritageireland.ie/en/

Period property UK is another site I love to visit http://www.periodproperty.co.uk/ and I especially like reading about the Period Property of the Month section. There are also lots of articles to read on all kinds of topics.

When it comes to shopping and searching for special things for the Yank’s house I love ebay http://www.ebay.com/ . We have found everything here from our vibrating table to make our floor tiles to the little Bakelite brown dolly switches for our lights.

When it comes to sharing and chatting to friend I have my blogs and all you lovely followers, twitter and facebook.

I hope you found some of this interesting. I could go on and on as I have visited thousands of sites over the years but this is just a few that spring to mind and that might interest my readers.

Why not leave a comment this week with your favourite restoration/building web site and I will check them out.
Posted by Catherine Kane at 11:15 4 comments: