Okay – so our next dilemma was how to finish off our floors. As I said our budget wouldn’t extend to a stone floor and even clay tiles. Ceramic tiles would create a seal on the floor trapping in dampness so this wasn’t an option for us either. Back on the internet I searched for a cheaper solution.

We considered making a limecrete mix of lime and sand with some colour added and laying a finished slab. We could maybe polish this later. We also made inquiries about having the slab stamped. This is a process used on concrete patios and drive ways which gives a finish that looks like stone or brick.  The stamps are expensive to purchase and we were worried we might make a mess doing it ourselves. We did find a contractor but he had never worked with lime and had never stamped a floor indoors. He didn’t want to take on the job.

I then got it into my head that we could make limecreat tiles. We could use moulds to make the tiles and dye to colour them. Back on the internet I found a supplier in America The Mold Store  who could supply 4 by 4 inch rustic moulds. We decided to give them a try. I sent away for the moulds and some different dye colours, red yellow and black. The order arrived without any hold-ups.

Our first attempts were not very successful, they were full of air  holes. It made no difference how much shaking we gave them – my arms were falling off. To make these tiles successfully we needed to be able to give them a good shake and get all the air out of the mixture. It also took a few experiments with the dyes to get a colour we were happy with. We decided to make terracotta tiles and plain tiles (granite sand and lime). We would lay these in a checker-board pattern.

We now knew that to make these we needed to be able to vibrate all the air out of the mix and make the tiles strong  – we needed a vibrating table. I found one on ebay and it was purchased and delivered within a week. This made the job much easier.

I spent evening after evening in the garage vibrating tiles for the floor that summer (Pat had other jobs to do in the evenings – like cutting grass and hedges and general maintenance around the place) but when winter set in and the evenings got dark and cold Pat took over the tile making and did a batch every other night. We would make up a mix in the cement mixed – one night terracotta the next night plain – just so we didn't get bored. Okay, I hear you all laugh – it is easy to keep us amused. We only had 16 moulds so it was a very slow job.

Now the main difference between making tiles with lime and making them with concrete is the drying time. Lime is so much slower to dry. We found we had to leave the tiles at least two days before we could turn them out of the moulds. We had to mist spray them with water every day so they wouldn’t dry too fast and crack. Even at this they were still very soft. We would lay them out across the kitchen table for a further two days spraying them regularly to help carbonation. Then when the next batch was ready to take out of the moulds the set on the kitchen table was moved onto the kitchen windowsill. By the end of the week we could hardly see out the window they were stacked so high. On Saturdays we would pack them into a box and take them down to the house where we stacked them on a pallet in the basement. Then the whole process started again for another week.

We spent the winter months making tiles. We didn’t lay them on the floor until the following summer. By then the new LECA and lime floors were totally dry and the tiles fully matured. We had no idea how these tiles would work out. They appear to be getting harder the longer they were made. Whether they would be hard enough to stand up to the ware and tare of us walking on them only time would tell. Now several years later – happy to report – we still have a floor.

The day we started laying the tiles, Pat was back at the cement mixer - mixing a sand and lime mix to set the tiles in. He then laid this on the floor, a small area at a time and I followed behind him setting the tiles into the mix. It took two days to get them down. We had to give the subfloor a good spray of water before we started and keep a spray can of water on the go all the time, dampening the floor continuously.  Because of the LECA underneath the floor was drying out fast.

Then a week later we came back and pointed the space between the tiles - again with a limecreat mix. Our daughter Theresa came down to help with this job and spent the day on her bum filling in the gaps with us. She was a great help and it was great fun having her at the Yank's house. The finished floor looked great.

Around the same time as all this was going on Pat and I celebrated our 25th wedding anniversary. I decided that this momentous occasion warranted a week off from the Yank’s house. I booked us a few nights in a five star hotel in rural Spain. We hadn't had a holiday since we had bought the Yank's house and a holiday was definitely needed. The hotel we stayed in was a converted farmhouse and barn – now I hear what you are thinking and yes – you are right. We returned home full of ideas. One of these ideas was to copy a stone floor we saw at the hotel. It was made up of ordinary flat stones you would find lying about set randomly in a limecrete floor. It looked so organic and old – We wanted to give it a try. So on our return home we went stone picking and when we felt we had enough to do the floor in the hall between the two basement rooms we had a go. It turned out just as we had imagined. 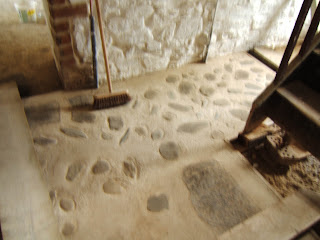 At this stage I should mention Henry O’D Thompson of The OldBuilders Company.  I found his web site while surfing for information and was able to see extensive photographs of work carried out by Henry and his team. I knew if anyone was to understand our love for this old building this man would. So not been of a shy disposition – when we were trying to decide how best to do our floors I phoned Henry and ask his opinion. I found him very helpful and willing to share his expertise. Later when faced with the dilemma of how best to seal the limecrete tiles I sent him an email and asked his opinion again.  And when we put down the little stone floor I emailed him again to ask about sealing this floor. Henry hasn’t had much success with floor sealers. He said

The thing about these kinds of floors is, yes they get grubby, but after a few years grubby looks good, the patina you see on old stone floors and wood floors does not LOOK grubby do they !.

So with this in mind we are leaving the floors naked for the moment. We will coat the limecrete tiles with some linseed oil before we set them in the limecrete but that is all. Again this may be something we need to come back to in time.
When I asked Henry what he thought of us making the limecrete tiles he said the world needed people like us – prepared to experiment. I sent him photos of the finished floors and he loved them.

Henry is a lovely man and I appreciate all his advice and the time he took to speak to me on the phone and to email me. His name is definitely on the invitation list for my first garden party!
At the end of one winter making tiles we only had enough for one room. I couldn't face another winter making tiles so instead we decided to purchase some slate for the second floor. We laid these leaving a square space between them which we floored again using limecreat and flat stones. I am going to let the following photo explain what I mean.

We are very happy with the finished floors. Everyone who comes in comments on them. People often say weren't we lucky so many of the old tiles survived. They ask us were these floors always here. They cannot believe we made the tiles ourselves. Over all we believe the floors add to the character of the building and because they are made of lime they are very dry and allow the building to breathe.
However we have had one visitor who commented that the Yank's house is not very luxurious and that we will not be able to walk around in bear feet. This person is probably right.
Posted by Catherine Kane at 08:27