Yank's House - What hides behind the fireplace?

When we found the Yank’s house there was an old green range cooker in the basement kitchen. Opening up the lid, we discovered the cooker was full of twigs and soot and debris that appeared to have come down the chimney. On the top floor of the house the chimney walls showed smoke damage. It appeared there had been a serious chimney fire at some stage. A full investigation of the chimney was needed if we wanted to open it up and use it again. 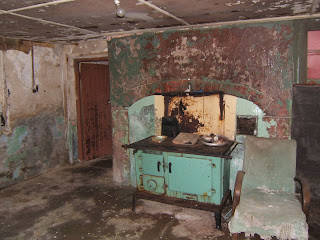 We started by pulling out the green range – which fell apart from rust once we moved it. Then we took a sledge hammer to the wall blocking up the arch of the old fireplace. What we discovered was quite shocking.

Behind the range a wall had been built up to close over the face of the old fireplace but the flue from the range cooker had just been pushed through this wall into the wide open space behind. When it was first built the space would have been empty and just filled up with smoke which eventually would have made its way up the chimney.  But there was no way of cleaning this space out so over the years it had backed up with soot, sticks and other rubbish the crows had thrown down  as they tried to build their nests.

We were amazed that the house had never burnt down.  We took barrows of dirt out from behind the range cooker and then started to clear the chimney. There were several layers of crow’s nest with skeleton crows trapped between the layers. At one point the chimney was so densely packed with sticks, mud, sheep’s wool, feathers and God knows what else that we had to break a hole in the wall to loosen it. Eventually we were able to stand in the fireplace in the basement and see light at the top end of the chimney. 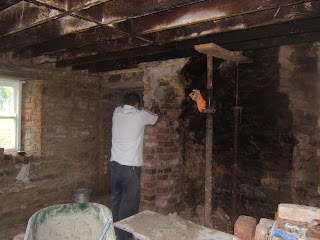 The old brick arch had been plastered over with cement possible when the range had been installed. It was difficult to get the cement plaster off the bricks and by the time we had finished the bricks were badly damaged. In fact the structure looked very dangerous. I was worried it would fall. 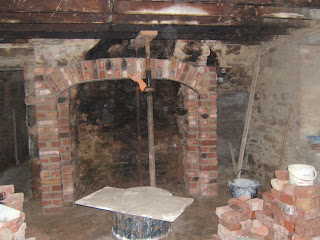 We had to get supports in fast in case the chimney came crashing down. Then we headed off to the local salvage yard for old brink to repair our fireplace. Jason who has done other brick and stone work did the job and soon it looked like it had always been there. 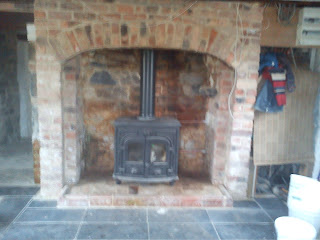 When it was finished we were able to line the chimney and install a new stove. We are very pleased with the end result.

An examination of the fireplace and the chimney revealed that the current chimney-breast is not the original. The chimney rises up to one side of the current structure not in the center where one would expect it to be. Originally the fireplace would have been wider – taking over the full wall. Chipping away at the plaster in the little alcove beside the fireplace revealed a stone structure that suggested a much wider chimney-breast. Also we found a small brick arch in the wall that may have been an opening into the space under the stairs.  We wondered if it had been a fuel store. But there are many questions we will never know the answers to.
Posted by Catherine Kane at 07:52